El Gouna Film Festival’s mission is to showcase a diverse range of films, catering to a creative and well-versed audience. Designed for artists and filmmakers, GFF aspires to champion better communication between cultures through the art of filmmaking, connecting filmmakers from the region with their international counterparts in the spirit of cooperation and cultural exchange.

The Festival is dedicated to the discovery of new voices and strives to be a catalyst for the development of cinema in the Arab world, particularly through its industry segment, CineGouna Platform. Inspired by El Gouna’s diverse culture and picturesque environment, GFF is nestled in the midst of a groundbreaking cultural hub and the spectacular structure of the Gouna Conference and Cultural Centre. Gearing up for its Fifth Edition, El Gouna Film Festival has secured its standing as an essential pillar of the film industry & certainly one of the leading film festivals in the MENA region. In parallel to the screenings, the festival will organize the “CineGouna platform”, which is a creative and business hub designed to support Egyptian and Arab talents where a wide range of meetings will be organized between Arab and international directors, producers, and distributors with the aim of enhancing business opportunities for the Arab cinema. In addition, the event will present round-tables, workshops, panels, and masterclasses.The festival presented a selection of the newest films from around the globe and hosted established and emerging filmmakers. The program will include three competitive sections (Feature Narrative Competition, Feature Documentary Competition, and Short Films Competition) an Official selection out of competition and a section devoted to special programs. The festival will give special attention to films with humanitarian content.

A creative hub for minds and markets, CineGouna Platform is an industryoriented event created to support and empower Egyptian and Arab filmmakers and help them find artistic and financial support. CineGouna 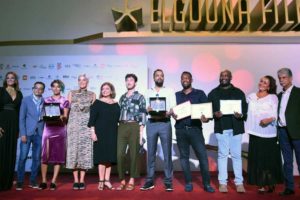 Platform presents the CineGouna SpringBoard and CineGouna Bridge programs that provide opportunities for sharing and learning. CineGouna SpringBoard is a project development and co-production lab that offers opportunities to find creative and financial support for Arab film directors and producers with projects in development or films in post-production. CineGouna Bridge is a meeting point and a forum for dialogue between different cinematic voices, in which Arab filmmakers and their international counterparts engage in and share their perspectives on a wide range of subjects related to the social and business aspects of cinema.

Master Classes
Master classes are one of the highlights of the festival. The audience has the privilege of listening to a 2-hour intimate conversation with an industry leader on career paths, choices and challenges, the nature and philosophy of film art, etc.

Roundtable & Panel Discussions
During the 9-day festival, participants will have the opportunity to listen to moderated groups of panelists sharing their perspectives on subjects such as financing and distribution. Each discussion will be followed by a Q&A session.

Workshops
The festival will conduct a series of workshops developed with our partners. Participants will work on specific aspects of film production over the course of several days with the support of experienced industry professionals in the field.

Screenings
Rough-cut screenings of the selected films in post-production are scheduled during the first 2-3 days of the program in order to allow industry guests, mentors and jury members to watch them before they meet with the projects’ teams.

The 5th edition of El Gouna Film Festival will be held from October 13 to 22, 2022, in El Gouna, located in the Red Sea Governorate, Egypt.

Film Submissions will open on March 21, 2022 and close on August 15, 2022. Submissions of both feature-length and short films for selection in the program of the 5th edition of GFF must be made in accordance with the provisions set out in El Gouna Film Festival’s rules and regulations as outlined below:

A preview committee appointed by the festival will view and shortlist films from eligible entries. The GFF programming team will make the final selection from the shortlisted entries.

If a film is selected, as per international guidelines, a maximum of 3 screenings per film will be held during the festival, unless specified or agreed otherwise.
El Gouna Film Festival accepts entries from all countries of the world to be screened in the following sections of the festival:

Official Selection out of Competition

Only films that premiered after November 15, 2021 are eligible for the festival sections. Preference will be given to world and international premieres.

The minimum duration of a feature narrative film must be 65 minutes.

The minimum duration of a feature documentary must be 52 minutes.

The maximum duration of a short film must be 30 minutes.