Film Fest Gent is Belgium’s most prominent annual film event. It started in 1974 as a student’s film festival and has developed into one of Europe’s foremost film events. 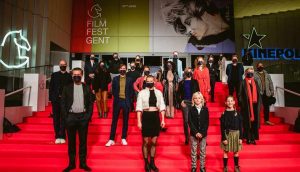 Every year in October it presents some 100 feature films and 50 shorts from all over the world in various sections to an audience of over 100,000 spectators. Film Fest Gent is a competitive festival, focusing on “The Impact of Music on Film” at which some 12 to 15 feature films compete for two Awards. The competing films are viewed by an international jury, which will pick out two films for following prizes:

We will expect to present the film in (at least) it’s Belgian première.

The 49th Film Fest Gent will once again include a wide choice of films from all over the world, mainly focusing on fiction films (long and short) and, to a lesser extent, to documentary (mainly focussing on music- or film linked themes). Animation is also included. The festival presents films in digital and 35mm formats.

The 49th edition of Film Fest Gent will take place from at Kinepolis Gent, Studio Skoop, Sphinx, KASKcinema, Vooruit and other venues in the City of Ghent. The purpose of the festival is to promote the art of film making in all its shapes and to emphasise the variety and richness of the medium as an art form. The festival has an Official Selection with films in and out of competition.It also includes various side sections outlined in articles 8 to 11 below.All films (except for the retrospective titles) will be screened in at least their Belgian première (so not shown in Belgium before). Upon proposal by the organising committee, the festival will award a special award of honour to one or more living film personality in recognition of their merits and contribution to the art of filmmaking.

After a successful collaboration in 2021, Film Fest Ghent and Courtisane – FFG’s little Ghent-based festival brother – will join forces for the upcoming 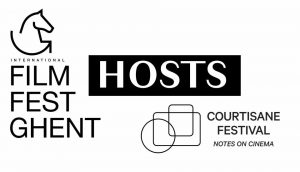 festival edition as well. Contrary to last year, when the joint forces focused on bringing the Portuguese director Pedro Costa to Ghent for his drama Vitalina Varela, the entire festival programme of the adventurous film festival will now run parallel to Film Fest Ghent in October 2022. As times remain unstable for festival organisers in the first half of 2022, the film initiative Courtisane decided early on to move the festival to October. The successful collaboration in 2021 formed the beginning of a more extensive creative alliance.

Pieter-Paul Mortier, Courtisane coordinator and programmer: “Normally, our anniversary edition would have started tomorrow/Wednesday 31 March. It was crystal clear that this was not possible. The fact that we can count on the high-quality support of Film Fest Ghent this autumn is a blessing. This way, we can, even in 2021, guarantee full publicity to our beloved filmmakers and audio-visual artists on the big screen, together with our beloved audience in the theatres.”

Wim De Witte, Programme Director of Film Fest Ghent: “The fruit of our collaboration and one of the highlights of Film Fest Ghent 2021 was an intensely fascinating masterclass by Pedro Costa, whose film Vitalina Varela (2019) was also selected for our Official Competition. We can only look forward to the further exchange of both of our idiosyncratic film selections and audiences.“

Courtisane is a film platform dedicated to film and audio-visual arts. Every year, Courtisane organises a film festival in spring, which highlights both recent and older or rediscovered films by local and international filmmakers and visual artists, with a special focus on the relations between images and the world, aesthetics and politics, experimentation and commitment.

While celebrating its 21th anniversary in October 2022, Courtisane will also present Out of the Shadows during the festival, a programme and publication focusing on five female pioneers of Arab cinema. The work and vision of filmmakers such as Assia Djebar, Jocelyne Saab, Heiny Srour, Selma Baccar and Atteyat Al-Abnoudy will be brought back to the foreground. At last, this programme can be discovered after it unfortunately could not take place in 2020 due to the Covid-19 pandemic.

Film Fest Gent annually invites minimum 12 and maximum 15 films for its thematic competition focusing the jury’s and audience’s attention to the creative contribution of the soundtrack/music to the overall effect of a film. This competition is reserved to non musical fiction films, i.e. films that do NOT owe their existence to music. These films have a minimum duration of 70 minutes. For each competing film a composer, music supervisor or sound designer (or comparable credit) will be credited. The competing films come from at least 6 different countries and not more than three from one country can participate. The aim is that at least 50% of the competing films have no Belgian distributor.

On proposals of the organising committee, an international jury is assembled, made of at least five personalities from the field of cinema and culture that have displayed a proven competence in cinema. It will not include any members who may have cooperated in the creation of any of the competing films. A festival’s representative can be present at the jury meetings as consultant in matters of regulations and procedures to be followed. The vote of the president will count double should jury voting come to a repeated draw.

Once the jury have viewed all the competing films, it will award the following prizes: The Grand Prix for Best Film. The Georges Delerue Prize for Best Music or Best Application of Music or Best Sound Design. Ex aequos are not possible. The jury can mention certain films at their convenience.

The non-competing Galas & Specials section, will consist of special event titles (such as opening and closing title) and a series of important new features that are expected to shortly open in Belgian/Benelux cinemas and receive their Belgian premiereat the festival.

The Official Selection is an anthology of films from all over the world. Originality, content and innovative use of the film medium are primary criteria. Neither running time, origin, nor format can be an obstacle for selection. This section will be divided in:

Focus. Next to the annually recurring focus on film music, the festival will choose each year a specific focus on films from a country or region;or focusing on a specific theme.

Sound and Vision. The festival programmes a limited amount of relevant music films. Both documentaries and fiction films can be included.

Artists on Film. The festival will also present a program with portraits, essays, reflections and testimonials on artists. Filmmakers, authors, architects, painters, a.o. can be the focus.Both documentaries and fiction films can be included.

Shorts. The festival organizes a competition for International Shorts and one for Belgian student shorts. These shorts have a maximum running time of 30minutesand were not shown in Flanders before(see separate regulations).Furthermore a selection of non-competing international short and medium length films is possible. Shorts are either screened in combination with a feature or in a compilation program. Shorts have a running time of maximum 30 minutes. Medium-length films have a running time of 31 to 69 minutes.

The programme can also include TV-films and TV-series, presented in the section Serial Madness.

Classics is the festival’s retrospective section of restored classics or classics linked to other parts of the program.