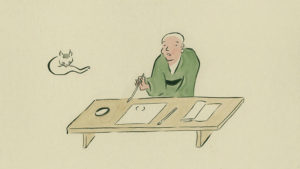 Imaginaria is an event that has acquired an international level and is part of a furrow of profound cultural innovation. Imaginaria lives and transforms into the heart of the art city of Conversano and in particular inside spaces and containers of absolute architectural and artistic value (Aragonese Castle, San Benedetto Complex, Cathedral Churchyard, historic squares).

A MARK OF SUCCESS FOR A FESTIVAL OF THE COMMUNITY
IMAGINARIA is the first and only international animated film festival of Apulia region.
In its history Imaginaria has grown enormously, earning an important artistic and social position in the international festival sector.
Festival of “people and places”, Imaginaria manages to create a family atmosphere among the public and professionals who come in open air cinemas of Conversano. Imaginaria, which is characterized by the importance of “numbers” and the excellent quality of thousands of works of international standing, is a project to promote, disseminate, film training, which aims to promote the independent authors of animated films. Imaginaria intends to trigger, in a long-term perspective, all possible synergies in the community helping to create socio-economic opportunities in the area and at the same time promote the culture of animation. The festival, therefore, is a project which aims to spread the use and knowledge of animated films not only during the event, held every year in Conversano, but also in places and times of the year using different networks, made up of other festivals and exhibitions (national and international) to which Imaginaria participates or which it is the promoter.

THE FESTIVAL OF PEOPLE AND PLACES
IMAGINARIA is primarily an event of “people and places”, a community festival that allows and encourages the involvement of all. Squares, terraces, narrow streets, beautiful places of the medieval historic center of Conversano (churches, castle, streets and historic buildings), or areas of cultural enjoyment where the festival is held, help to create and unique “family” feeling, which is considered one of the main elements of originality and therefore the stretch that positively distinguishes Imaginaria from other national and international festivals. This atmosphere is made up of a number of elements including evoked very easy “access”, the proximity with directors and authors, the high attendance of young people and children. This gives the festival a popular and didactic function, which manages to bring even an audience of non-experts (see for example film laboratories with the schools and training workshops with children, exhibitions with illustrators, live concerts). Imaginaria thus appears to be a unique opportunity for broadening of cultural horizons for the local community and contact with other worlds and cultures, even far away, and through the film events and more directly, through encounters with parallel worlds to animated films or illustration (conferences and exhibitions) and the comics (graphic novel, bookshop dedicated). Imaginaria appears so, to its users as an experience of being filled, as offering the opportunity to spend a cultural holiday in an area capable of providing a wide range of tourist (cultural event, wine, food, art, history, entertainment , environment and territory).
Finally, for its originality as to form and content, the festival becomes an element of attraction and cross contamination between different audiences and visitors from other areas, not only of the Puglia region but also from other Italian regions and Foreign countries.

One of the future goals of Imaginaria is to increase the number of visitors, not only during the event, but throughout the year, thanks to the many activities that take place inside the container IAF: training on animated films in schools, courses of animation films in self-financing, but also projects to promote trans-disciplinary: animated films and literature, film animation and illustration, animated films and comics, animated films and live music, animated films and cultural marketing, etc. Imaginaria is a successful synthesis of two of the high-growth sectors in Apulia, or cultural tourism and, above all, the cinema as an industry with huge potential for development and booming region with the support of Apulia Film Commission. The event set down a definite strengthening and consolidation of demand this cine-tourist area thanks to the quality of the films and culture in general; the originality for the characterization of the event as part of the network of international film festivals: design, content, location (old town, countryside, coastline and beaches of the Adriatic, archaeological cultural sites) and above, how they interact with the community in a sustainable social, environmental and economic; typical as Imaginaria reflects and enhances strongly the identity, the nature and local culture in a perspective of internationalization of the brand “Made in Apulia”.

The festival is organized and promoted by Atalante company and directed by Luigi Iovane.

To submit your film to the Imaginaria – International Animated Film Festival (IAF), please read our eligibility requirements below.

ELIGIBILITY
Films must have been completed after December 2021.
We accept all categories of animation films: traditional animation, 2d digital, mix media and stop motion, 3d and visual effects, music videos, experimental.
Running time for the short films must be no more then 20 minutes and no more then 90 minutes for feature film.
Foreign films submitted to the Festival must be subtitled in Italian or English (.srt file).
Entries with HD digital files (1080p – H.264 – MP4 – MOV).
You must upload the work on a file sharing website (eg dropbox, wetransfer, 4shared, etc..)
Those selected for screening during the IMAGINARIA Awards will be notified at least one (1) month before the event starts by e-mail.
Those selected for the screenings will be notified at least thirty (30) days before the event date by e-mail.
One official entry form must accompany each individual submission.
Film producers must also agree to include in future promotion material the mention of the participation at the Imaginaria, the relevant section and any award received, along with the official IMAGINARIA LOGO.
The works already sent to the previous editions of “Imaginaria” will not be admitted.

The prizes and special mentions for international competition:

IMAGINARIA KIDS AWARDS
This awards are determined by a special youngsters jury:

Up to 100 shorts films and 5 feature films will be selected as finalists in the IAF Awards competition.
The winners will be announced at the Winner’s Day.