The festival history goes back to Drøbak in 1973. A group of volunteers with Bjørn Bjørnsen and Olav Sandsmark had received funding from the National Association of Municipal Cinemas, as Film & Kino was called at the time, for organising a film festival. Here cinema managers, politicians, film professionals and the press, and also a more general public, received a broad presentation of the programme for the autumn and winter. 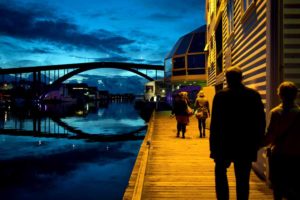 The French directorial genius François Truffaut also visited the festival. He was an honorary guest during the very first edition, and added film-historical prestige for what was an ambulating festival up to 1986. After having visited ten Norwegian cities, the festival found a permanent home in Haugesund in 1987. That year Gunnar Johan Løvvik joined the festival as a festival manager, a position he held until 2015. Gunnar Johan Løvvik was awarded the Norwegian order of chivalry Knight 1st Class of the Royal Norwegian Order of St. Olavs for his cultural initiative. In 2005, he received the Rogaland County Culture Prize. Tonje Hardersen was appointed as festival director in March 2015.The Norwegian International Film Festival in Haugesund has for several decades celebrated film and film art by being a meeting place for the Norwegian and Nordic film industry and the general public. The festival is an arena for film-professional and film-political discussions and a display window for national and international cinema..

The Film Festival centre of Norway is Haugesund,  the gateway to fjords and mountains with the North Sea at its doorstep. When you experience the endless variety of its surroundings, you may well agree that Haugesund can rightly be considered “The Nordic Cannes”. The city has an interesting history of sea travel and fishing, and is today a thriving modern town with much to offer. It`s town centre offers a wide selection of restaurants and pubs, cultural events and fine hotels, all within easy reach.

The Norwegian International Film Festival Haugesund is a non-competitive festival. As the films screened are by invitation only, there is no submission. The festival mainly presents features for theatrical distribution in Norway, in addition to features from the Nordic countries in the market section New Nordic Films and the public section Nordic Focus. The festival does not screen short films.

During the festival, a number of prizes are awarded to films in the official program each year. Awards to films in the main programme of the Norwegian International Film Festival:

The Norwegian Critics Prize
Chosen by a jury appointed by the Norwegian Film Critics’ Association.

FIPRESCI Award
This prize goes to the best Nordic film, from a jury appointed by the international film critic’s association FIPRESCI.

The Ray of Sunshine (digital fine print by Camilla Thuv)
Given by The Norwegian International Film Festival and a jury appointed by the Norwegian Cinema Managers Association.

The Audience Award (lithography by Ivar Rudi)
Given by the Norwegian International Film Festival, selected by an audience jury appointed by TV Haugaland.

The Honorary Award goes to an actor or director who with an outstanding ability to move his/her audience has made a substantial contribution to the art of cinema.

Next Nordic Generation Award
Given by the Norwegian International Film Festival. It consists of NOK 10,000 and goes to the production team behind the best film from the Nordic film schools.

Eurimages Lab Proj ect Award.The award goes to the most promising cutting edge film among the eight nominated presented as work in progress. The award encourage a film that is experimental in form or content, made on the side of traditional filmmaking framework and showing international collaboration.

Scandinavian Debut Award
The award goes to a new director and/or producer talent from Norway, Sweden or Denmark. The winner receives a development or production grant of a value of NOK 120.000 from Dagslys. 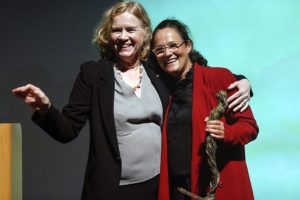 Best Project Award
The award goes to the best project in the Nordic Co-production Market. The winner is granted participation at the Producers Network in Cannes.

The Andreas Award (lithography by Eli Hovdenak)
Ecumenical award given by Vårt Land and a jury appointed by Vårt Land, the Norwegian International Film Festival and Film & Kino. It goes to a film that was released in the period from the end of last year’s festival and up to and including this year’s festival.

The City of Haugesund’s Faun (statuette by Fritz Røed)
Given by the mayor of Haugesund to a person who has visited the festival numerous times, who has made a contribution to further the Norwegian film and cinema scene, and last but not least, the winner shall have a special fondness for Haugesund.

THE AMANDA NOMINATIONS 2022
The Amanda award is handed out in 22 different categories and the award ceremony will take place in Festiviteten in Haugesund Saturday 20 August. The Amanda award ceremony is part of The Norwegian International Film Festival which takes place 20–26 August 2022. The films considered have had theatrical release in Norwegian cinemas during the period of 1 July 2021 to 30 June 2022.

This years most important dates

From 20 – 26 August, the 50th Norwegian Film Festival will be held in Haugesund, and we are planning a great and eventful festival in its physical form in August. The festival starts with the Amanda Award ceremony on Saturday 20 August and it is still broadcast in a new and exciting form on NRK (our state TV channel). Sunday 21 August is the official opening of the festival, but there will be film screenings already from Saturday morning. As always, we can offer content-rich days with an exciting film program, industry-relevant seminars, film policy conferences and fun social events, in line with current rules and recommendations for infection control. New Nordic Films kicks off for the 28th time on 24 August and lasts until the festival’s closing ceremony on 26 August. Then the festival prizes will also be awarded, before the closing film brings this year’s festival to fruition. Also this year, we will of course arrange for a safe festival where infection control is complied with according to current rules. At the same time, we must naturally also ask for a reservation if the situation should change. Should we have to cancel part or the entire festival, the accreditation fee and expenses for registered events in the accreditation form will be refunded in full. We would also remind you that events this year can be full due to space restrictions in connection with the infection control rules. We therefore encourage you to sign up for “as usual” if you want to secure a place at the various events. We look forward to welcoming you to a somewhat different, but still nice festival and we look forward to seeing you in Haugesund.