Telluride Film Festival will take place September 2 – 5, 2022, with an added day to the weekend-long event. Festival organizers are optimistic that by September, when the vaccination process will then be long underway, and by taking all necessary safety precautions including the 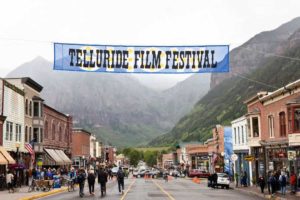 extra day, an in-person event will likely be possible. “We are beyond excited to announce our dates,” said Telluride Film Festival executive director Julie Huntsinger. “Our position within the festival calendar gives us hope that we will be able to hold the festival this year. We are guided by science and are continuously evaluating the global pandemic in relation to health, travel and live events. Time will tell, but in the meantime, we are busy planning for and putting together an incredible program.”The Telluride Film Festival is not just a picture show. It is Tributes to luminaries who’ve propelled the medium forward; it is candid discussions with a film’s creator or the historian who champions it; it is discovering that the person in line behind you made the film you just enjoyed; it is engaging in lively debate with every manner of film lover in the summer sun of a Colorado afternoon, always minutes away from a new exhibition. Our audiences were the first in the world to laugh with JUNO, to observe THE LIVES OF OTHERS, to visit BROKEBACK MOUNTAIN, to learn the secret of THE CRYING GAME, to experience BLUE VELVET, and to witness THE CIVIL WAR. We resurrected the silent epic NAPOLEON, and highlighted the genius of animator Chuck Jones. We take great pains to remain not a competition, but a celebration of the best in film — past, present and future — from all around the world. This is one weekend immersed in an unabashed carnival of film: viewing, breathing, eating, and talking cinema. This is The SHOW.

Luke Dorman is the Lead Graphic Designer at Meow Wolf, a Santa Fe-based arts and entertainment company that creates immersive, interactive experiences. Luke’s current focus is on design for Meow Wolf Denver, a permanent 4-story immersive experience opening in late 2021. Over the past 15 years, Luke has maintained a creative practice that straddles fine art, graphic design, and illustration. His contemporary and experimental approach to design work has led him to be recognized by Print, Communication Arts, the Society for Typographic Arts, GDUSA, among others. Prior to joining Meow Wolf, Luke worked in design education and carries his passion for teaching, mentorship and community building into his work today.

What’s playing in the Telluride program is not revealed until you reach the mountains. In what has become our tradition, three distinguished 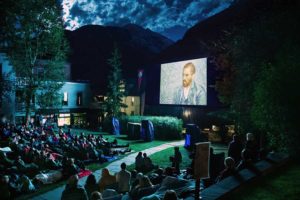 artists will be honored with a silver medallion, one presented each night of the Festival. We sometimes honor the well-known: Francis Coppola, Jack Nicholson, Meryl Streep, Daniel Day-Lewis, Penelope Cruz, Catherine Deneuve. But more often than not, we also like to spring a real surprise and pay tribute to those you may have forgotten, or never even knew: Abel Gance, D.A. Pennebaker, Harriet Andersson, Alexander Sokurov, Philip Glass, Joel McCrea, Andrei Tarkovsky. And then, picture seeing a movie before anyone else…before the ubiquitous critics, the in-laws, your local film snobs. Imagine viewing a new film without an ounce of prejudice because it is the first screening and you are its first audience. Telluride movies are always discoveries. BLUE VELVET, STRANGER THAN PARADISE, EL MARIACHI, CROUCHING TIGER, HIDDEN DRAGON, EL NORTE, TALK TO HER, BOWLING FOR COLUMBINE, BROKEBACK MOUNTAIN, CAPOTE, THE LAST KING OF SCOTLAND, JUNO, THE DIVING BELL AND THE BUTTERFLY, SLUMDOG MILLIONAIRE, THE LAST STATION, UP IN THE AIR, and THE KING’S SPEECH all debuted to the surprise and delight of Festival-goers. We also like to rediscover the treasures of cinema’s past: the pioneering works of the Lumière Brothers, the restored GREED, a range of newly restored silents with live orchestral accompaniment, the unseen films of Walt Disney, a cache of Cinerama, of 3-D classics… that’s the modus operandi of Telluride, the past bumps up against the present as the Festival provides a context for current cinema from what’s gone before. Trust us. When the secret’s unveiled, there’s no program anywhere quite like The SHOW.

30 years the Telluride Film Festival has presented students with the opportunity to experience the Festival as it was initially intended—a celebration of film as an art, a festival of discovery and rediscovery, and a place to share your love of film with others who feel just as passionately as you do. You don’t need to be a film student. All you need is a consuming passion for film. Seize the opportunity to immerse yourself in a direct and intimate dialogue with some of the greatest filmmakers out there, joined by peers that share your enthusiasm.

The goals of the Festival’s education programs are as follows:

Expand participants’ worldview through film screenings and discussions with filmmakers
Develop participants’ ability to become more thoughtful and discriminating media critics
Assist participants’ growth into more thoughtful and active cultural participants and leaders for the future. Broaden participants’ knowledge and understanding through learning of other students’ backgrounds and lifestyles. Provide participants with the opportunity to become lifelong friends with peers from divergent backgrounds. Imagine being a part of an exclusive give and take with such filmmakers as Werner Herzog, Kelly Reichardt, Barry Jenkins, Alejandro G. Iñárritu, Todd Haynes, Joshua Oppenheimer, Francis Ford Coppola, Errol Morris, Hirokazu Kore-eda, Karyn Kusama, David Fincher, Trey Edward Schults, Wim Wenders, Agnieszka Holland, Tilda Swinton, Mike Leigh, Lynne Ramsay, Walter Murch, Michael Haneke, Xavier Dolan, Chloé Zhao, Asghar Farhadi, Guy Maddin, Luc & Jean-Pierre Dardenne, and Volker Schlöndorff, to name just a few of the past participants in the Telluride Film Festival Student Symposium. Don’t just imagine it – be there. It all happens Labor Day Weekend in the Colorado Rockies at the Telluride Film Festival Student Symposium. The Symposium is open to 50 college and university students, no matter what your major. We’re looking for some inspired students to screen the year’s best films and have in-depth discussions with some of the greatest names in cinema. Yes, there’s an official application but the primary requirement is a love of film. All participants in the Symposium will receive a Student Festival pass and a modest travel stipend—the rest is up to you.