IndieLisboa focuses on bringing independent cinema closer to the audiences, showing films that do not reach the regular distribution circuit. The festival screens mostly films (features and shorts) in competitions of both young and renown directors. The festival is also a platform to premiere and release new films, thus an important ally for 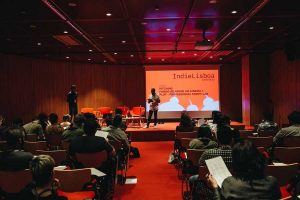 Portuguese distributors. The festival fosters cultural and linguistic diversity by diversifying its geographical scope.
The festival aims to draw the spotlight to worldwide productions and also to the discovery of Portuguese recent films (some even works in progress) through its competitions and industry-oriented activities. The festival has also focused, for this reason, in successfully expanding its industry core. We expect to reach an audience in screenings of around 40.000 people and an overall audience of 50.000 people, once again confirming IndieLisboa as the most well attended film event in Portugal.
The activities that go beyond regular screenings – workshops, masterclasses, debates, a scriptwriting lab, a film fund, a pitching forum, screenings of works in progress for industry guests, networking events, etc. – will continue to expand in 2020, consistently supporting our mission of film literacy and promotion of independent cinema. Industry attendees (programmers, directors, producers, distributors, sales agents, film critics, etc.), actively contribute to the dynamics of the European film exhibition and distribution network.
IndieLisboa International Film Festival focuses on the exhibition of works that fill the void of film circulation shaped by the mainstream production and exhibition dominating the market. Every year, showing more than 270 films, IndieLisboa attracts audiences and film professionals from all over the globe by giving them the opportunity to discover recent films from emerging talents and to rediscover reputed authors. The festival sections also comprise themed programs, shining a light on relevant affairs, aiming for a conceptually and geographically diverse selection.

IndieLisboa’s main sections are competitive programs composed by world, international or national premieres. With few exceptions, all selected films have their national presentation at the festival. IndieJunior, the children/youth section of the festival, is crucial for boosting local film literacy levels in this range of public and for the shaping of new audiences. The festival also aims to draw a spotlight on the discovery of Portuguese recent films through its national competitions and industry-oriented activities.

IndieLisboa is also a festival that focuses on a program designed specifically for the industry (audience of film professionals, filmmakers, producers, sales agents, programmers, critics, etc.). This industry core, parallel to the screenings program, is composed of workshops, masterclasses, debates, a script-writing lab, a film fund, a pitching forum, screenings of works in progress and also several networking events, among other activities. The industry center is consistently and continuously expanding, actively contributing to the dynamics of a more diverse film exhibition and distribution network.

Since 2004, the city and the public have been welcoming the festival with open arms. Every year, for 11 days, IndieLisboa shows more than 270 films of all genres, receiving about 35,000 spectators and more than 400 professionals.
www.indielisboa.com
Portugal Film

Agency for the promotion and internationalization of Portuguese cinema. This project communicates and disseminates national cinema production in a coherent strategy and language, working with different interlocutors – festivals and international shows, international distributors and exhibitors, cinematheques, cultural institutes and specialized press – and the specificity of each film.
www.portugalfilm.org
Cinema programming

IndieLisboa intends to stimulate the public exhibition of films that are neither distributed nor exhibited within Portugal’s traditional circuits. The festival gives preference to national premieres.

International Competition – the International Competition for short and feature films is composed of films that have never been publicly exhibited in Portugal and which were completed in 2021 or 2022. First, second or third works, fiction, animation, documentaries and experimental films may apply to this section. The festival is particularly keen to promote the work of new directors;

National Competition – composed of Portuguese feature and short films finished in 2021 or 2022, preferably a world and/or national premiere;

Silvestre – showing works by young filmmakers and renowned authors, this section finds the norm in its singularity. Under the wing of Silvestre we have shown works that reject consecrated formulas, which awaken new languages ​​and whose rebellion mirrors the spirit of the festival.

IndieMusic – a competitive section that comprises films – mainly documentaries – focusing on music and its protagonists;

Director’s Cut – a program of recently restored classics, rediscoveries and films which reflect on cinema itself, its artistic dimensions and history;

Mouth of Madness – composed of films that festively march along the cliff regardless any fear, this section presents works that defy traditional conventions;

IndieLisboa also presents a retrospective section dedicated to those who go beyond the mainstream in filmmaking and help to open new and unconventional paths for cinema.

To apply to IndieLisboa’s International Competition, films must fulfill all the following criteria:
Fiction, animation, documentary or experimental short (up to 59 minutes) or feature films (from 60 minutes);

First, second or third works by their director(s);
Completed in either 2021 or 2022;
First public presentation in Portugal.

Regarding other sections of the festival:

No limitations apply to the number of the previous works made by the director(s);
Films produced in 2021 and 2022;
Portuguese premieres are preferred.

The festival may, in exceptional circumstances, decide to select films that do not fulfil one or more of these criteria. Such selection is at the discretion of the festival organizers

Feature Film International Competition Jury, composed of renowned personalities from the world of cinema, at least one of whom will be Portuguese. The Jury is responsible for assigning the following award: Feature Film Grand Prize and Special Jury Award.

Short Film International Competition Jury, composed of renowned personalities from the world of cinema, at least one of whom will be Portuguese. The Jury will be responsible for assigning the following awards: Short Film Grand Prize, Best Animation, Best Documentary and Best Fiction.

Brand New Jury, composed of renowned personalities from the world of cinema and responsible for assigning the Brand New award.

IndieMusic Jury, composed of renowned personalities from the world of cinema and music, responsible for assigning the IndieMusic Award to a film in the respective section.