Hot Docs Canadian International Documentary Festival is North America’s largest documentary festival, conference and market. Each year, the Festival presents a selection of approximately 200 cutting-edge documentaries from Canada and around the globe. 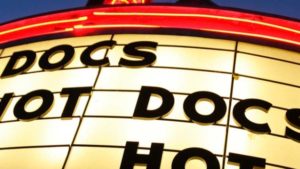 Hot Docs is a national, charitable organization dedicated to advancing and celebrating the art of documentary.

Our mission is to advance and celebrate the art of documentary, and to showcase the work of and create production opportunities for documentary filmmakers.

Conference & Market
With its lively mix of public and professional events, Hot Docs is the ideal North American meeting place for the international documentary industry.

Hot Docs Forum
During the Festival, Hot Docs also presents the renowned Hot Docs Forum, a dynamic pitching event that stimulates international co-production financing for projects at various levels of completion. With more than 200 broadcasters and distributors from around the world, it is a preeminent source of up-to-the-second market intelligence.

Hot Docs presents Citizen Minutes, a series of short documentaries highlighting ordinary Canadians doing extraordinary things to improve their communities. Meet bold and unlikely changemakers who inspire us to jump in and get involved in civic issues close to our homes and hearts.

Docs For Schools is pleased to present the Citizen Minutes project films to teachers across Canada. At a time when citizen engagement is needed more than ever, through these eight short docs your students will meet civically minded Canadians making a difference who just might inspire students to engage within their own communities.

While themed around civic engagement, there are many subjects and topics to pull from each film. With a selection of stories as diverse as the communities they represent, there is something for everyone with the Citizen Minutes films, along with an education package for each.

Launched in 2006, Docs For Schools presents free daytime screenings for educators and students at the Hot Docs Ted Rogers Cinema during the Festival and throughout the school year. The program also provides opportunities to

In June 2016 it was announced that a generous gift from the Rogers Family enabled Hot Docs to purchase the Cinema from the Blue Ice Docs, and that it will continue to offer audiences the best in documentary programming at the Hot Docs Ted Rogers Cinema.

It can be overwhelming in the classroom today. Time with students is limited, the world is changing, and teachers are being asked to be on top of it all with viable and engaging content that connects to curriculum.

To assist, we have created Docs For Schools Today, which offers free, online curated content. Some docs will be historical, but content will be relevant to what is happening in our society, our culture, and our world today.

Most films will be short and complement a variety of school subjects. The “Learn More” heading under each film description offers additional links about the subject. This content is a starting point for students, providing context to begin a deeper dive into a subject.

The site will be updated frequently offering easy online access at school or home.

Docs For Schools is here to assist with doc content for your teaching. If you have any questions or are looking for specific subject content, please contact Lesley Sparks at lsparks@hotdocs.ca.