Braunschweig International Film Festival, founded in 1986, the filmfest is the oldest festival in Lower Saxony, Germany. Started by a handful of 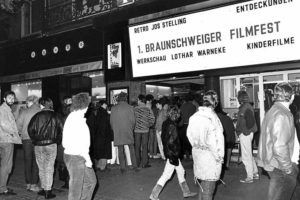 cinema enthusiasts it has developed into an audience festival for 25,000 visitors. Around 280 film industry professionals – filmmakers, actors, producers, composers, press – attend the festival to see about 170 full-length and short films on six screens. Since 2009 the festival operates its own cinema, the UNIVERSUM Filmtheater, with two screens for 87 and 207 seats.
Programme
Young European cinema of the highest standard is one of the trademarks of Braunschweig Int’l filmfest. “Music & Film” is Braunschweig’s second focal point, drawing attention to the sound of the moving images. International premières, cinéma d’auteurs, film concerts, retrospectives, tributes and four awards round off the filmfest’s profile, giving the audience and the press ample scope for new discoveries.
Braunschweig Int’l filmfest devotes itself to a long neglected aspect of cinema history and culture: the close relationship between film and music. Since 2002 we have invited famous film composers to present a selection of their films and talk about their work in a music master class. In cooperation with the Braunschweig State Orchestra, one of the oldest orchestras of the world, filmfest also showcases film concerts with new compositions.

The City of Braunschweig 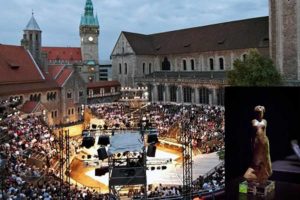 a rich cultural heritage, urban charm and expansive parks and natural landscapes – Braunschweig, the city of “Henry the Lion” and home of 257.000 inhabitants, unites the past and the future, the historic and the visionary, the traditional and the innovative.

Writer Wilhelm Raabe, composer Louis Spohr and mathematician Friedrich Gauß lived here and through them art, science and esprit developed. Braunschweig is home to the Herzog Anton Ulrich-Museum, the first public museum to open in Germany in 1754. Lessing’s “Emilia Galotti” premiered in 1772 as did Goethe’s “Faust I” in 1829. Since 1963 Lower Saxony’s only university for fine arts is located in Braunschweig.

With the European Actors Award THE EUROPA, Braunschweig International Film Festival celebrates actresses and actors for their outstanding artistic performance and contribution to the European film culture. DIE EUROPA is being awarded since 2007. Previous award winners have been Hanna Schygulla, Bruno Ganz, John Hurt, Stellan Skarsgard, Isabelle Huppert, Olivier Gourmet, Barbara Sukowa and lately, in 2014, Mads Mikkelsen. In addition to the prize money of 15.000 Euros donated by main sponsor Volkswagen Financial Services AG, a bronze statue called THE EUROPA, will be awarded. The statue DIE EUROPA was designed by the Brunswieck artist Sabine Hoppe.

The following is a full listing of all rules and regulations governing the submission of a film to the 36thBraunschweig International Film Festival, organized by the non-profit association Internationales Filmfest Braunschweig e.V. (hereafter called »the festival«), which apply to the individual awards-series and sections.The person submitting the film (hereafter called the »submitter«) acknowledges that he or she has obtained consent from any and all owners, creators, writers, producers and/or other authorized representatives of the film and understands that by submitting the film to the festival he or she confirms that he or she has read and agreed to all rules and regulations set forth below.The 36th Braunschweig International Film Festival will take place from Nov. 7th to 13th, 2022. In the event of tightened measures or event cancellations due to COVID-19, the festival reserves the right to relocate the festival programme to digital space. In any case, the film festival will once again consult with the submitter.

Films may be submitted to more than one section. The artistic department reserves the right to assign submitted films to other sections within the curation as well as to not select submitted films for the festival.
Open to first and second feature films of European origin. The director must live and work in Europe or the film must be produced in Europe. The minimum runtime is 70 minutes. There are no limitations on content or genre. However, documentaries are excluded from participation. The film must not have been theatrically released, broadcasted on television in Germany or be available to purchase as DVD, Blu-ray or stream. German-festival or world premieres and films from the year 2021 will be first choice.

Films are submitted with the mention of genres/themes. The artistic department reserves the right to assign submitted films together into sections within the festival curation as well as to not select submitted films for the festival.
Open to all short films with a maximum runtime of 15 minutes. Open to documentaries. German-festival or world premieres and films from the year 2022 will be first choice.