Queer Lisboa – International Queer Film Festival is the first Portuguese Film Festival dedicated exclusively to screening gay, lesbian, bisexual, transgender and transsexual themed films, a genre known as Queer Cinema. This is a genre that outbreaks with increasing expression in major international film festivals and it’s the goal of Queer Lisboa to program what is more relevant in aesthetic and narrative terms in the worldwide panorama, trying to compensate the fact that the access to this cinema is restricted to the mainstream audience. 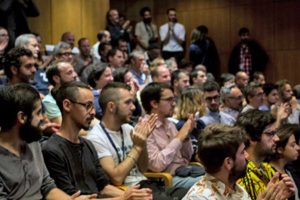 The programmed films are organized in the Competitions for Best Feature Film, Documentary, Short Film, School Film (short format) and Queer Art, this last one dedicated to more experimental languages. In parallel to the central program there will be non-competition sections, special screenings, film programs dedicated to a filmmaker, theme or country, retrospectives on the representation of homosexuality in film history, sections dedicated to Queer Cinema subgenres, as well as a set of parallel activities such as workshops, exhibitions, and installations.
Queer Lisboa was created in 1997 and is Lisbon’s oldest film festival. Through the years the festival consolidated its reputation internationally and at this moment it is one of the most recognized festivals of its genre in an European level and worldwide, for the quality of its programming and activities as well as the guests that it attracts.
The Festival has also established privileged relations with some of its European and world fellow festivals, with whom Queer Lisboa regularly exchanges programs, creates formative and cultural interchanges and to where its programmers travel on a regular basis. This network is also fundamental to the promotion of Portuguese cinema abroad.
In 2015 Janela Indiscreta Cultural Association started in Porto the first edition of Queer Porto – International Queer Film Festival.
Queer Porto will take place in the first fortnight of October and it intends to program some of the most emblematic works, creators and emerging trends of queer film and culture, in a multidisciplinary proposal that articulates several venues in the city, confronting different artistic languages, always in dialog with film.
Queer Porto has a Competition for Best Narrative and Documentary Feature Film, whose screenings take place at Teatro Municipal Rivoli, and also a Film School Competition. The short film screenings, video-installations and performances take place at other venues like Maus Hábitos or Galeria Wrong Weather.
Filmmakers will be in Porto for the festival. Queer Porto will also organize educational activities as well as more ludic activities, seeking to promote the event and to attract different audiences.

Call for Entries for Queer Lisboa 26 is now open 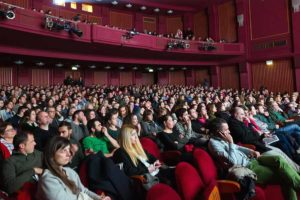 The Festivals accept fiction, documentaries, docu-fiction, experimental and animation long features or shorts. Please note that only 2022 and 2021 productions (or 2020, in case its European premiere happened after Queer Lisboa 25 and Queer Porto 7) will be eligible for the competitive sections.

The celebrations of the 25th anniversary of Queer Lisboa – Queer International Film Festival will start on May 17th, at Cinema São Jorge. In a partnership with the Education and Social Rights Department of the Lisbon City Council, EGEAC, E.M. and ILGA Portugal, the festival acknowledges the International Day against Homophobia, Transphobia and Biphobia with a cinema screening that will take place in Sala Manoel de Oliveira, at 6:30 pm. Admission is free by collecting tickets, on the same day, at the Cinema box office.

The film presented will be Famille Tu Me Hais (2020), that marks the debut of actor and director Gaël Morel – celebrated in his adolescence for his participation in Wild Reeds, by André Téchiné – in the documentary field, and where we are confronted with seven powerful testimonies that illustrate everyday episodes of homophobia and transphobia within the family. The idea for this project is the result of Morel’s involvement with Le Refuge association, which welcomes LGBTQI+ young people in situations of domestic emergency, and which in recent years has seen a rampant increase in requests for help. In a context in which homophobic speeches are legitimized by the political leaders themselves, and a growing wave of violence threatens the LGBTQI+ community in France (and throughout the world), it is urgent to expand the voices of these young people who, through violence exercised by their families