During the 51 years of its history the Alcalá de Henares / Comunidad de Madrid film festival (ALCINE) has confirmed its prestige and has turned into one of Spain’s most important short film competitions. It has become an obligatory point of reference for experts and cine lovers alike. Furthermore, it constitutes one of the main cultural events in Alcalá de Henares – cultural, artistical and universitarian place of the first rank as well as Patrimony of Humanity. 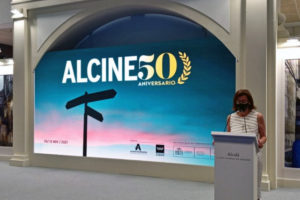 During these years the festival has served – thanks to its specialisation on short films and the utilization of this support as element of cinematographic initiation – to present the first artistic steps of those who subsequently became professionals of the first rank in our national cinema. Fernando Colomo, Santiago Segura, Álex de la Iglesia, Mariano Barroso, Juanma Bajo Ulloa, Jordi Mollá, Fernando León de Aranoa, Alejandro Amenábar, Isabel Coixet or Daniel Sánchez Arévalohave, among others, participated in the festival.

In the beginning of the 1980`s the festival has started a series of tributes to professionals and collectives of the Spanish cinema as well as tributes to foreign cineastes who are renowned but relatively unknown by the general public. Since then the tributes have emphasized the importance of the works of Spanish cineastes as interesting as the producer Emiliano Piedra, the stage designer Enrique Alarcón, the composer Carmelo Bernaola, the multi-faceted cineastes Iván Zuluetaand Gonzalo Suárez and, not to forget, the fundamental parts of the film crew like the directors of photography, the script writers and producers. In the 2001 edition the artistic directors were the protagonists of Alcine. Their mayor works were presented in a special exhibition. Aim of the initiative was to heighten the awareness for the work of those that usually remain in the background. In 1983 it was the producer Emiliano Piedra who became the centre of interest. In 1984 it was the stage designer Enrique Alarcón and 1986 was the year of the composer Carmelo Bernaola and the creation of music for the Spanish cinema. In the last edition it was Antonio Drove’s turn. The tribute to this very personal director was accompanied by retrospective screenings of his legendary works like “La verdad sobre el caso Savolta” or “El Túnel”.

The Alcalá Festival has, almost since its beginnings, related other arts to cinema. For instance, in 1983 the festival featured an exhibition of drawings by José Ramón Sánchez with cinematographic topics. In 1985 one could admire drawings by Federico Fellini as well as posters and photomontages by Josep Renau. All the film posters that had been presented by the festival in the course of the years were exhibited in the 1986 edition. 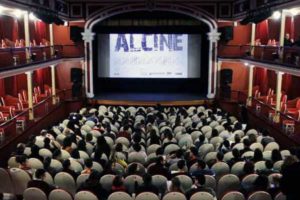 In 1987 the festival paid tribute to Pablo González del Amo with an exhibition about his work and cinematographic montage in general. Furthermore, the same edition featured two other exhibitions: One about the poster artist Jaime Nieto, the other one about the ‘Young German Cinema’. In 1988 the audience could visit an exhibition about the director of photography José Luis Alcaine. In the following year and as part of a homage to one of Spain’s most innovative and important artists – Iván Zulueta’s graphic work was exhibited, accompanied by an exhibition of photographs of Spanish film directors.

In 1991 Alcine presented the retrospective exhibition ’40 years of Polish movie posters’ and another one dedicated to the special effects of the master Colin Arthur. In the 1993 edition the preparation material for the film ‘Acción Mutante’ was exhibited – a film produced by Pedro Almodóvar and directed by Álex de la Iglesia, who became famous with a short film that was awarded in our festival. In 1995 one could see exhibitions dedicated to ‘Madrid and Cinema’, to George Mèlies and to information material of films that were shot in Alcalá de Henares.

While a great exhibition in cooperation with the Filmoteca Nacional(‘Soñar el cine – Dreaming cinema’) and one dedicated to Buñuel (due to his 100th anniversary) were features of the 29th festival, the 2000 edition was focussed on the poster artist and designer Juan Gatti. In 2001 the attention was divided between the works, photographs and first drafts of Spain’s most important Art Directors (represented in an exhibition called ‘La arquitectura de los sueños – The architecture of dreams’) and the illustrations of the artist Vizcarra. The last edition included an exhibition featuring the photographic works of three men who are cineastes as well as photographers: Iván Zulueta, Bigas Luna and Carlos Saura.

Furthermore, the Alcalá de Henares / Comunidad de Madrid Film Festival has tried to open a path for reflection upon the topics teaching cinema and visual education in Spain and about the process of cinema in general. In this regard, in 1983 workshops about teaching cinema in elementary school, middle school, high school and college were held. In 1984 Alcine organised a reunion of the directors of Europe’s five most important film schools: Lisbon, Paris, London, Munich and Rome. In the 1985 edition a symposium about teaching cinema in Spain took place which could count on the presence of numerous independent professionals from all over the country. Following the same idea, a workshop about `Cinema, Video and the new technologies and their importance for teaching‘ was held in 1986. In 1988 and 1989 the focus shifted to cinematographic creation in general. Courses providing an ‘Introduction to the cinematographic language’ were held by renowned cinema professionals. The practical workshop about Direction of Photography of the 1994 edition embodied another step ahead. In 1995 the workshops were focused on Spain’s cinematographic production.