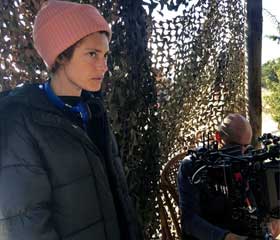 He worked as assistant director to Bernardo Bertolucci for the film L’assedio (1998). In 2009 he founded the production company Caspian Films, which produced and made the feature film Frontier Blues by the Iranian director Babak Jalali, which was selected at the 2010 International Film Festival des cinémas d’Asia in Vesoul and for the International Competition of the 62nd Locarno Film Festival. . In 2019 he made his first feature film as a director, entitled If Only.